Storing optical pulses using resonators is a key enabler of many applications, for example in optical communications, nonlinear optics or sensing. One of the ‘fundamental’ limitations of optical resonators is that they can either store a narrow bandwidth signal for a long time or a broadband signal for a short time. 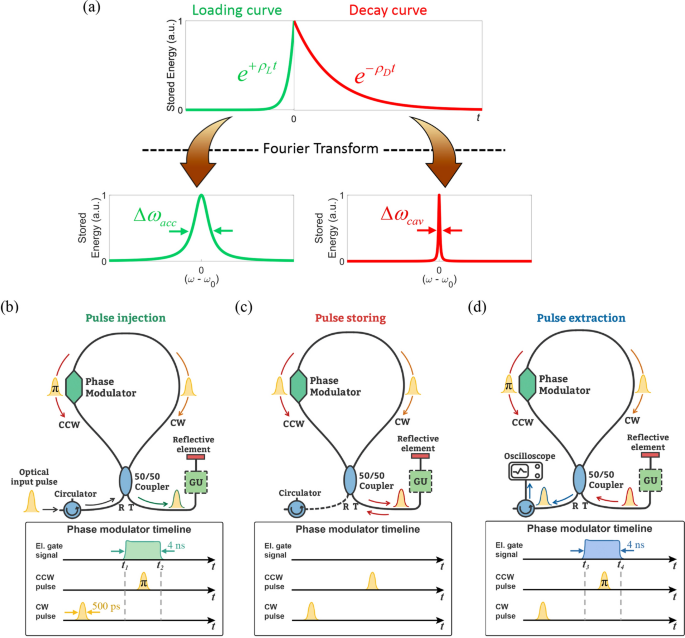 However, using a time-variant resonator, where the coupling between the resonator and the access waveguide is varied in time, it is possible to switch a resonator between these two states, i.e. from a high quality-factor, narrow band resonator to a low quality-factor wideband resonator. Together with colleagues from the EPFL, The University of Ottawa and the National and Kapodistrian University of Athens we have now implemented such a resonator using a fibre-based Sagnac interferometer as the tunable coupling interface. The interferometer acts as a tunable mirror, that can be switched from total transmission to total reflection, allowing us to capture a broadband pulse and release it at our leisure. Using this system we have demonstrated that the bandwidth and storage time can be fully decoupled, with the first controlled by the bandwidth of the modulator used for the switching of the mirror and the latter limited by optical losses in the resonator system.

We achieve a time-bandwidth product 30 times larger than possible for a time-invariant system. We store a 500ps pulse for several μs.

The full paper is available openly at Scientific reports.